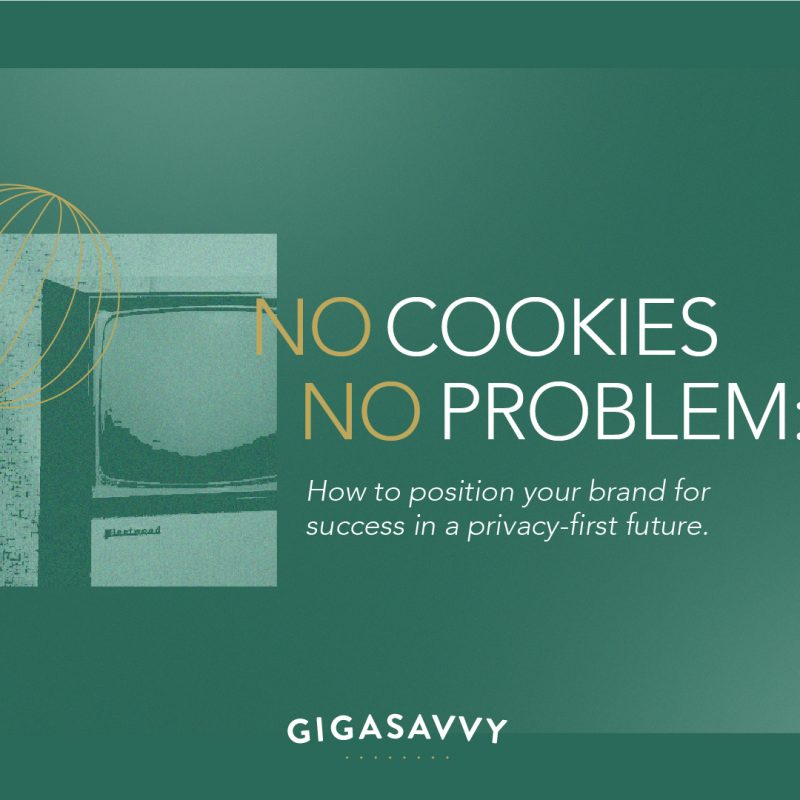 No Cookies, No Problem: How To Position Your Brand For Success In A Privacy-First Future

Big changes are afoot in the world of digital advertising, especially when it comes to privacy and the usage of consumer data —

The time-tested web cookie—a tiny piece of data stored on users’ computers that tracks their activities as they browse the internet—is heading for the chopping block. As user privacy and protection become increasingly critical to company optics, Google has re-written the playbook once again, but it’s really just the tip of the iceberg.

When Firefox, making up 4% of the browser market, said it was planning on ending support for third-party cookies, advertisers barely noticed. When Apple said they were taking Safari, with a 19% market share, down the same path, brands started to get concerned. Meanwhile, DuckDuckGo reached 100M searches per day early this year, while never storing or sharing users’ information.

But when Google announced that, starting in 2022, third-party cookies will be disabled by default in Chrome, the browser that 64% of the world uses, everyone realized that this change was for real and that the impact would be felt across industries. Even more recently, Google announced it will stop selling ads based on your personal web browsing history, which many feel is effectively ending that practice for the rest of the industry, but not necessarily for Google themselves, who will still retain quite a variety of “ways” to claim 1st-party data rights.

Playing in the Sandbox

So what exactly will the cookieless future look like? That’s not entirely clear just yet, and it may never be. According to Gigasavvy’s own Sr. Media Strategist, Richard Simmons,

“It’s more than just cookies themselves. The issue is profiling people and processing their info without consent. As advertisers, we must remain at the ready to act on new ways to responsibly connect brands with their audiences.”

The 2021 marketing zeitgeist is now fixated on Google and its ‘Privacy Sandbox,’— a series of projects and initiatives for testing out potential replacements for third-party cookies.

One option is to move away from single-user tracking and instead target small cohorts, which is the theory behind Google’s FLoCs (Federated Learning of Cohorts) proposal. The idea is essentially a more granular and algorithmically-constructed buyer persona. Instead of one, hypothetical, perfect customer, the software models a large number of unique personas that share many of the characteristics and tendencies of individuals in a subset of your target market, but which has no actual individual identities associated with it.

“Doing something like that was counterintuitive just nine or 10 months ago,” said Chetna Bindra, Google’s senior product manager for user trust, privacy, and transparency. “But the performance we’re seeing with FLoC shows that it’s nearly as effective as third-party cookies.”

Nielsen recently released its own next-generation, cookieless tracking solution called Identity Sync. It uses first-party identifiers collected from publishers and advertisers for identity resolution. According to Nielsen, the system was tested by the Spanish hospitality company Barceló Hotel Group. They reported that 96-percent of their conversions (in this case new bookings) were attributable to marketing touchpoints optimized with Identity Sync.

Not everyone is thrilled with the idea of letting Google call the shots for the future of tracking. Oracle, for example, claimed in a recent blog post that Google’s ideas are disguising an attempt to lock in users and publishers and maintain its dominance in the online advertising market.

Oracle also alleges that FLoCs won’t actually solve the privacy problem because Google’s algorithms will produce and optimize so many of them so quickly that it won’t be long before they narrow it down to FLoCs that purport to represent a cohort, but in fact, describe just one individual.

The biggest accusation Oracle hurled was that Google’s sudden interest in protecting privacy is really an attempt to get ahead of regulators, burnish its image by misleading consumers, and amass ever-greater stores of first-party tracking data that it alone controls.

Google, Oracle, Facebook, Amazon, and the other tech giants with an interest in the future of digital advertising will have to fight these issues out, but there is hope that a diverse ecosystem of privacy-safe ad technologies and products will emerge.

A Return to First-Party Data

That diverse ecosystem is sorely needed. Currently, 64-percent of ad buyers say they rely on Google for identity resolution, but many are already starting to diversify their options and take on new identity management partners.

Even if a workable, efficient, and privacy-compliant alternative to cookies emerges, advertisers won’t soon forget the dread they felt upon learning that their supply of third-party data could be turned off so abruptly. Many have realized that, in the future, they will need to cultivate and own proprietary stores of first-party data about their market and its customers.

“We’ve had as much inbound interest in the last five months as we have had over the last three years,” said Tasso Argyros, CEO of customer data platform ActionIQ. “The reason is people on both the brand and publisher sides are thinking a lot more about first-party data because third-party data is becoming less valuable for legacy and privacy reasons.”

Investing in first-party data will solve some of the problems the end of web cookies will cause, but it doesn’t absolve brands or advertisers of their responsibilities to protect user data and privacy.

To that end, some organizations have adopted so-called data ‘clean rooms,’ centralized depositories of anonymous data collected by advertisers, publishers, and tech companies. Though it adds new challenges to data management, that solution enables cross-platform, omnichannel measurement with zero risk of personally identifiable information being leaked.

Never Forget the People Behind the Data

It’s important to note just how complex this issue is and how high the stakes are. International governments, global tech giants, advertisers, publishers, and nothing less than the fate of the fundamental human right to data privacy, will all be affected by the recent changes.

As advertisers, branding experts, and analytically-driven marketers, the Gigasavvy team is watching the ecosystem closely and is optimistic that these changes will give us a stronger footing to better connect with consumers on a more human level.

Though marketing tech empowers us, we must not lose sight of the fact that human beings are the driving forces behind every online connection—amongst each other and among brands. This is an opportunity to balance the scales in order to solidify deeper connections in a digitally dominated world.

It’s said that great marketing and advertising blends both art and science to achieve positive outcomes. As disciplines, they meld intense ideation and bold, emotionally-evocative creativity with advanced metrics that generate actionable insights. The whole will always be greater than the sum of its parts.

In fact, an overreliance on analytics will almost always present creative roadblocks, leading to bland, homogenized advertising that often gets overlooked. If data and market research were the only voice in the room, ads like Apple’s groundbreaking “1984” might never have aired. Then Apple CEO, John Scully, went so far as to attempt to sell off some of the Super Bowl ad time he dedicated to it for fear of a major PR disaster. Today, it is one of the most esteemed campaigns of all time.

All this talk of data is much needed, but the real democratizer and opportunity lies in the power of truly creative work to connect with consumers.

Algorithms and optimizing machines fed a constant stream of user data have given advertisers more insight into their customers than at any time in history, and while that innovation yields incremental improvements in things like engagement and conversion rates, it still can’t ‘create’ in the true sense of the word.

It can’t invent something new and worthwhile by being cognizant of an unsolved problem, a deficiency in the world. It can’t know when to buck a trend, when to go against the grain, or when to take a crazy leap of faith. For that, you still need a human to add their emotional, instinctual, and cultural knowledge to the equation.

In our mad dash for data, the focus sometimes gets lost on just what we plan to do with it. Does data inform our work? Of course. But, we have to respect where it comes from, be wise stewards of it, and implement it in a thoughtful way that fuses the best of the digital and the analog.

To create something new you have to diverge from the common path. That’s where breakthroughs happen. That’s where ideas connect with the zeitgeist and beyond, becoming timeless.

Privacy is Worth Protecting… and an Invaluable Brand Differentiator

Among the tech giants, Apple has been an early and often promoter of technologies that protect privacy, which was categorically driven home by their “Privacy. That’s iPhone.” campaign.

When CEO Tim Cook testified before Congress in 2018 to discuss the role of the tech giants in our lives, he said Apple believes privacy is a “fundamental human right.” Apple VP of software technology Bud Tribble added: “Ultimately, privacy is about living in a world where you can trust that your decisions about how your personal information is shared and used are being respected.”

For the general public, constant headlines about data breaches, identity theft, and a growing awareness that we are being monitored, tracked, and recorded virtually everywhere are making brands that stake out a strong pro-privacy stance look that much more desirable.

That might explain why tiny DuckDuckGo, a more private search engine alternative to Google or Bing, saw its traffic rise 62-percent in 2020 and is now the second most popular engine on mobile phones (which account for 60-percent of all searches).

There’s an ongoing debate in advertising as to its appropriate role in shaping culture. Many in the industry believe that we play a critical role in not just impacting the overall culture we operate in, but in creating it as well. With privacy at play, an opportunity has arisen for bold brands to differentiate themselves from their competitors by taking a stand on this vitally important issue.

“As leaders of industry, we have the opportunity to stand for something bigger than our digital data dependencies. By putting people and their privacy first, rather than prioritizing profit through mass manipulation, we can create a safer and more connected world that still breeds success for our respective organizations.”

It’s not just smart brand positioning, it’s a legitimate cause that the entire industry can rally behind for the betterment of society as a whole — and, in so doing, promote new innovations and simply better marketing and ads.

Are you concerned about connecting with your customers in a privacy-first world? Get in touch with our Brand Strategy Consulting services today to discuss how you can be prepared for the next generation of marketing. 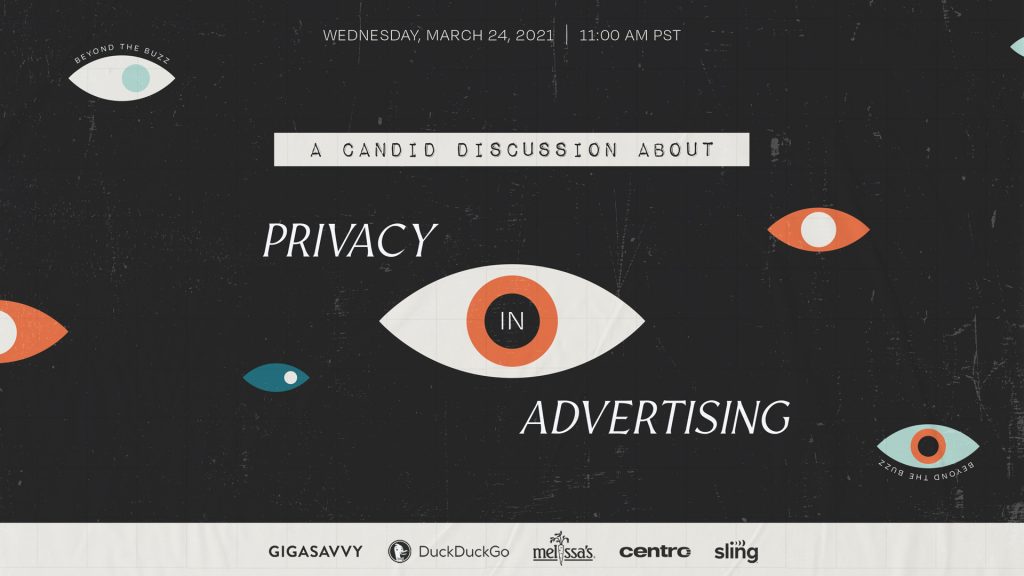 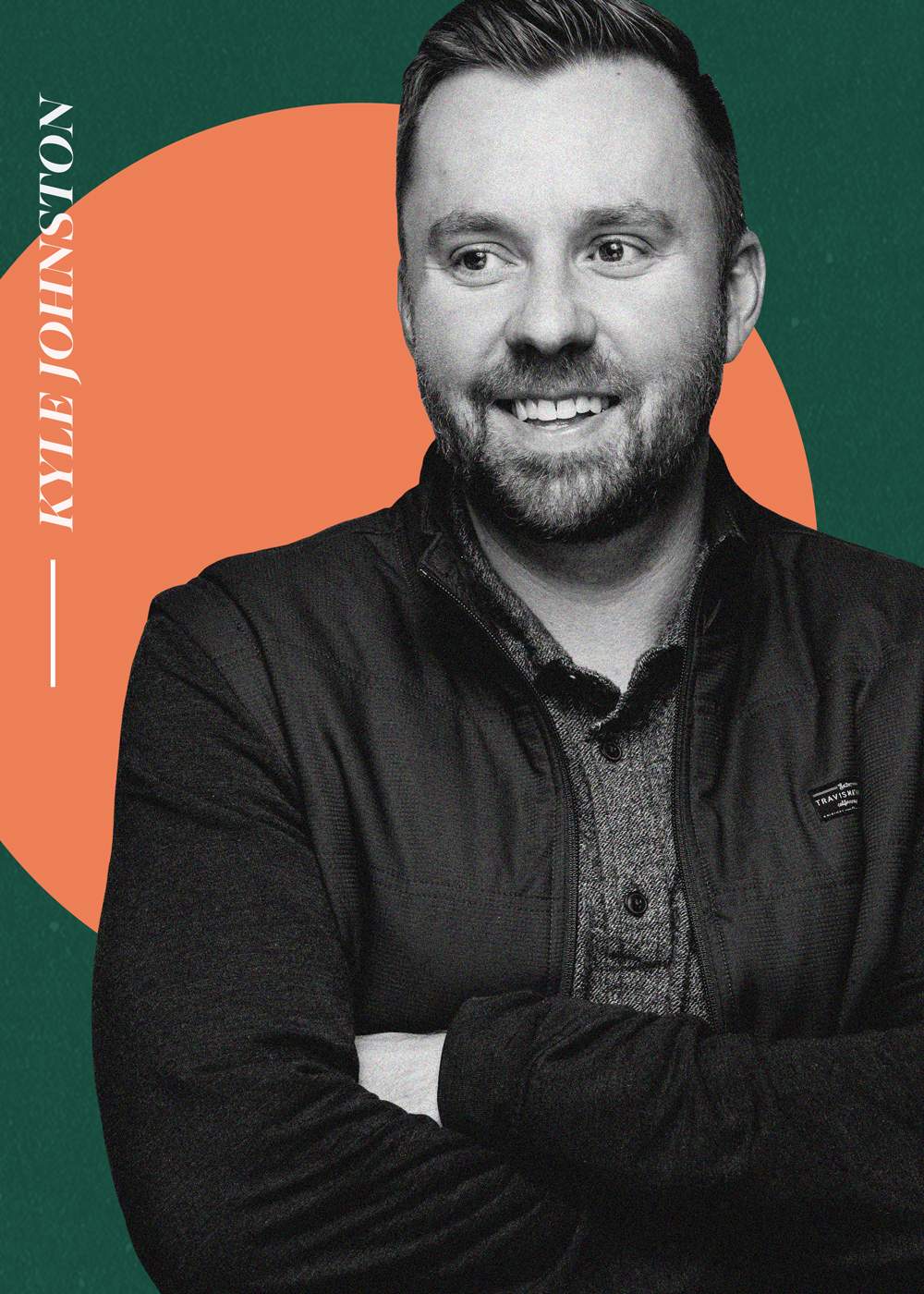 As one of Gigasavvy’s Founding Partners, Johnston has been instrumental to the success and growth of Gigasavvy into the company it is today—a full-service marketing agency working with well known, inspirational brands to drive results through passionate storytelling and innovation. 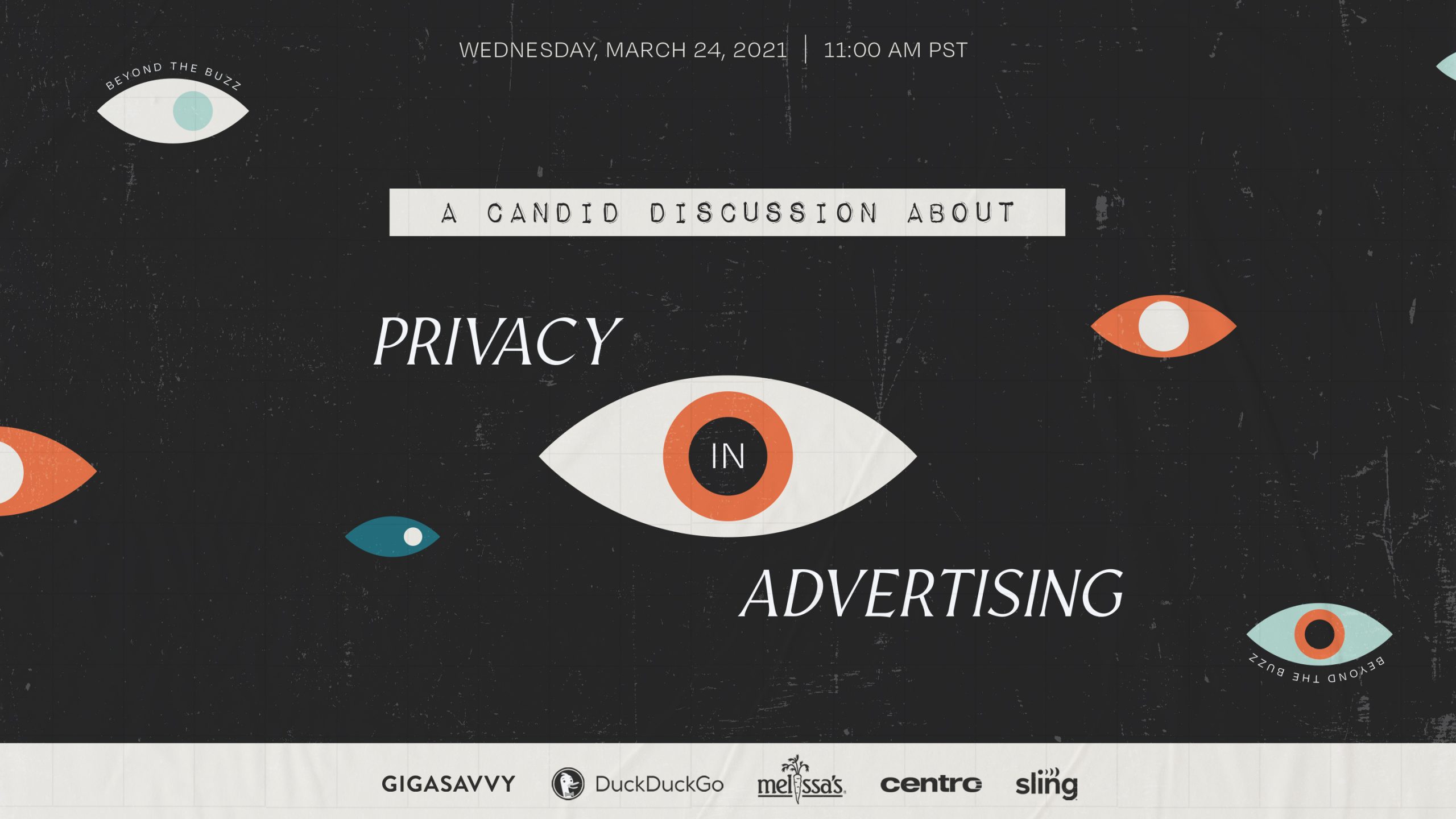 Beyond The Buzz: A Candid Discussion About Privacy In Advertising